So… the wheels of the Universe are fully in motion. Since 3:38 this morning (via a surreal airport drop-off by my 16 year old son—another blog for another time), I have been in transit toward the next destination in my journey. I am currently en route to my newest (in terms of length of time I have known him) brother’s home in North Carolina.

Growing up, I always wanted a big family—a family where I belonged. Despite an adopted mother (now 81) who loved me as much as any human will ever love me who tried to make me part of the family, I, for the most part, have never had that. Always the “black” (“pink”?) sheep of my adopted family, I never fit. It was evident—not just because of my obvious sexual identity leanings—that I did not come from these people. Meeting my biological mother in the 80s gave me but a taste of “my people.” Reuniting with her in 2004 (before she passed suddenly in 2007) and bonding with my most beloved little brother, my family began to grow, expanding to two dear aunts and others. It didn’t take long to find out there was a place I fit and belonged.

Of course I would eventually become a father in the early 90s—first two of my own children and later by being blessed with two more by marriage—and would start my own family, one wherein I belonged and where I could ensure no one would ever be or feel rejected.

But of course I still longed for the “big, extended family” that loved each other and celebrated holidays and reunions and vacations. Always believing somehow I was in control, I expected a relationship with my bio mom that would grow over the next few decades; but I was wrong. Her life ended way too soon and my brother and I—bound arm-in-arm by the two aforementioned loving aunts—became a family in a way that none of us had not anticipated. (I’m quite certain our mom is quite pleased.)

It was after this time that I began to finally think more seriously about finding my birth father. Later in life, my mother had told me he wanted me—even though she decided at her young age that would not be good for me—and that reassured me somewhat. Still thinking I was in control, i contemplated the moment I would engage my own Antwon Fischer moment. (If you haven’t seen this movie, rent it immediately and watch it when you can be uninterrupted. Brilliantly acted, it’s a beautiful, powerful true story.)

And again: not what the Universe had in store for me.

Repeat readers of my on-again/off-again blog will remember that my gaggle of siblings on our father’s side found me. Yes, gaggle. I know that refers to geese but it always conjures up images of “a lot” of geese—because there are a lot of us—5 that I know of and at least one more.

After spending a weekend with the older two (just 7 and 19 months younger than me) and spending hours chatting with our California sister, again I had that familiar feeling: I fit. Although physically we don’t appear to favor (although my sons carry many of the genes of this branch of the family—most notably the red hair), we have many similar sensibilities and mannerisms. They’re all generous, they laugh, they love their families, and they take care of each other. How fortunate indeed!

Two of the girls had already met our bio-dad. My brother had not and we’d discussed for months possibly meeting him together. I contemplated it but hadn’t made a definite decision—until my brother bought me a plane ticket.

And that is where I write to you from today. (OK so I’m posting this after I get off the plane bcz I’m too cheap to pay $9.95 for the in-flight wireless.)  Headed to Raleigh, NC to meet my younger brother and his partner and friends and then tomorrow, onto Lexington, KY to meet the man who—apparently in some contest to see how widely across the United States he could spread his seed—brought us all together as a family. Ironic?

(We’re also getting to meet the youngest sister, by way of Louisville, before heading back to NC.)

To be sure, there are hurts and questions that may never be answered or resolved. And yet, we’ve laughed a lot about the experience. (Especially last night, as my brother and my WW compadres will attest. Bobby and Debby—I’m gonna try to get those souvenirs you asked for.)  And there’s a bit of nervousness on both our parts. Even though we’re grown and established in ourselves, we wonder: what will he think about us, our accomplishments, the men we have become—as if we’re still seeking that validation.

It is not exactly the way we’d want things to turn out and who knows how our meeting with him will go. And we may not receive that validation we seek.

But 40 years later, the universe has brought us all together in a random, chaotic way that to me (and those of you who know me will certainly agree) makes perfect sense. And this big, wonderful family I finally have is the only validation I need to know that… 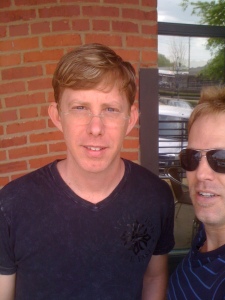 mitch and part of me

9 thoughts on “my own personal antwone fisher moment”