I’ve now been to church twice in almost 6 years and I’m pleased to report to you that I didn’t cry nearly as much this time. My heart, though still very closed, is now not quite so much. (This will make at least one particular sister-friend rejoice.)

For weeks, I’ve been putting off writing about my first time back in a church service, mainly because the experience was so raw and visceral. But now I feel I am ready…so here goes.

Some of you know I am in a relationship with a man who attends and is a member of the Cathedral of Hope in Dallas. 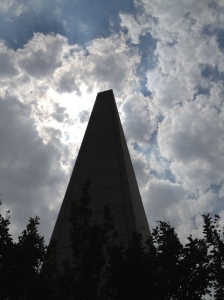 As I wrote about previously (read: my battle with religion), when the invitation to attend with him was extended, I did not respond immediately nor arrive at the decision to attend without great deliberation. I reached out to two of my closest friends and discussed it at length. I had a long conversation with him about it. To say I wrestled with the decision is putting it mildly.

Ultimately, I decided to go.  Taking a chance and finally starting to explore this bitter place in my life was in large part due to trusting in the goodness, patience, and understanding he had shown me up to that point (and has continued to show, I might add).  Because I perceived him not as a religious person but a spiritual one, I was comfortable with going ahead and heeding the Universe’s nudge. Somehow, I felt safe with him; and my feelings were, as you will read, validated.

OK: what a service! This sheltered church of Christ boy had never seen anything like it!

There was a choir.
And an orchestra!
And stained glass.

And there were emblems and banners and ceremony.

Though I had begun to dabble in more expressive worship through my ex-gay therapy group, this type of religious service was unlike any I had ever been to in my life. I was raised in and still love the a capella tradition but the music—wow—it was so beautiful! It started out quietly and would later swell with crescendos that evoked chills as well as tears. The choir’s beautiful sound at times seemed to whisper and would later boom as its collective voice lifted up in praise. Occasionally the congregation would join in the song and at times, participated in prayer and recitations, and greeted each other with smiles, handshakes and embraces. The pastor—who delivered a very powerful message— was so kind, happy, and authentic. It seemed to me as if she was talking to each individual person.

AND THERE WAS AN ORCHESTRA!

As all of this was going on, I made a very stark observation. Having grown up reading that the Jesus of the Bible spent his time among the hopeless, downtrodden, and weak–yet having never once witnessed it in a church—I saw, all around me, these very people. It occurred to me at that moment that, though not exclusively, gays in our society do comprise the outcasts, the ones that churches and families reject, and bullies of all walks of life (including those who wield pulpits and run for elected office) attempt to drive away and discriminate against. These beautiful people around me–men and women, mostly gay but some straight, some dressed well and others unable to do so–had found a place of love and acceptance where they could feel God’s love for them and worship him without the fear of judgment. It was remarkable.

As an aside: there was this lovely, ageless white-haired man in an awesome blue and white checkered suit (1960s), with a butterfly broche on his lapel and wearing blue Vans. With his smile and the twinkle in his eye, he radiated so much joy; he gave me a glimpse of how I hope to be at that age.

So…that’s the setting. And—as I fully expected and feared—I had an enormous emotional reaction to all of it. But again, the Universe was ahead of the game, providing me with this compassionate, caring man who, knowing of my reluctance and fear, nurtured me through it.

I mean…imagine inviting someone you’ve just started getting to know to attend church with you, only to have that person basically start crying from the very first prayer, eventually start sobbing through every song, snot everywhere, and almost breaking down when the pastor provided communion to and blessed the two of you.  Yeah. I couldn’t sing or say a word.

But the way he cared for me–this man who was just beginning to know me, seeing me so vulnerable and open–forever endeared himself deeply to me.  He held my hand. Comforted me. Pulled me close to him. Put his arm around me. Embraced me while we were given communion (my first in over five years). And gave me Kleenexes for the tears and the oh-so-attractive snot.

Honestly: I could not have done that alone.  The Universe—ok, God–knew this.

I pulled it together by the end of the service and was able to meet some of his friends, hoping they just thot I’d had a really bad allergy attack. Not one of my better moments.

So this past Sunday, four weeks later (because of his work schedule preventing him from being able to attend), I returned to the CoH and I cried far less. The service itself was a bit more upbeat yet still very moving. The music, the chorus, a singer who sang the Lord’s Prayer in Italian, a lively praise team with a spunky female lead, and a rousing message about maintaining a presence of gratitude all worked to penetrate my spirit, seeping into some of the dry places in my heart.

I was still unable (unwilling?) to participate in prayer, still finding it difficult to bow my head (which he noticed but did not criticize). I still kept my distance, so to speak, from the experience, behaving as more of an observer than a participant. I did, however, join in and sing one of the old spirituals I knew (It Is Well With My Soul). As the timeless lyrics and tenor notes found their way from my memory to my lips, my voice joined his and all the others, and for a moment—I felt connected.

Afterward, I had the opportunity to help with one of the ministry efforts of packing the pantry with the hundreds of bags of groceries that had been given.  Again, I observed the zeal these people have for service and remembered how even menial acts done on behalf of others could evoke a sense of gratitude and purpose.

I have a long way to go in reconciling my spiritual self but it’s a journey I know I must take. It appears that for the time being, I have found a place for this healing to occur and a man who is willing to lend me his love and patience while I do so.