So get ready everyone: the holy war against Barack Obama and his second term is about to begin. We wanted this–now we better be prepared to work hard to make sure he’s re-elected!

5/9/12, 12:43 p.m.–Without a doubt, there has been much grumbling over Barack Obama’s evolving stance on gay marriage. Now, after Obama’s education secretary and the vice president have come out for marriage equality, a brouhaha has developed over his refusal to “come out” for the civil rights of gay Americans. 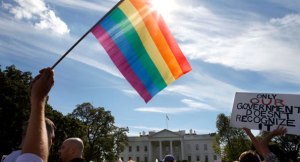 Some, like my favorite political columnists Jonathan Capehart, point out that Obama is not leading as he should by not advocating full support. Yet let’s consider what he has done:

What elected Republican–who hopes to ever be re-elected–would ever do this for us?!! Do you think Mitt Romney will? Seriously?

Yes, I too want our president to make a public statement in support of equal civil rights for LGBT Americans.

But I also want these wars to end and I want America to change the healthcare system. And I want us to be able to accomplish many of the other goals he laid out for his first and hopefully second terms. So much change in such a short amount of time is bound to create a lot of fear and backlash.

Therefore, I urge us all–gays and those who love us–to remain patient!

I understand the ire toward Obama’s political calculations and his reluctance to fully support marriage equality; but brothers and sisters: if Obama’s support of gay marriage would possibly create just enough momentum to cost him this election, then the result will be far more damaging to the gay and civil rights movement than his [temporary] fence riding will ever be!

I believe Obama WILL fully “come out” for marriage equality once he’s re-elected. But because of the DIRE importance that he get re-elected first, I am willing to remain patient with the political maneuvering. Otherwise, the march for civil rights for LGBT Americans will experience a severe setback.

And if he DOES come out before the election, as our hearts hope and many critics demand, we should ALL be prepared for a holy war in America.

Let there be no doubt: the “second class citizenship” of gays and lesbians in America will come to an end–whether Obama states his support for us today or after he’s sworn in for a second term on January 20, 2013. Until that time, I will remain supportive of him, because in this election, he is our only hope.

History will ridicule you, Rick Perry.
To Friends of Gays Everywhere, It’s Time for Tough Love.
I wasn’t always for gay marriage.

2 thoughts on “we Must remain patient, diligent”

Leave a Reply to tdub68 x