Isn’t it ironic that on the 45th anniversary of the Stonewall Riots—an event where a group of Americans stood up against hate—hate would be used to try to intimidate the LGBT community in Dallas.

You see—people can hate and hurt and kill and even do those things in the name of the Divine.

But in the end, the actions of those people never, ever win. Not really.

Today en route to church, we saw the first evidence of the tagging. A monument erected to diversity and to remember those lost to AIDS—The Legacy of Love, built by community pioneers through the Oak Lawn Committee—had been defaced with graffiti. Undaunted, we worshiped and celebrated in the message of how loved we all are. Then word began to spread—our very church driveways were also defaced along with another local business and a neighborhood bridge.

As our pastor pointed out in this interview, this was an act of “passive violence” and it hurts. It was an attempt to intimidate. It’s scary. And it kindof pisses me off.

Later in the afternoon, we joined a group of community volunteers at the monument and scrubbed as much of the hate off the sandstone monument. Women and men, brown, black, and white, young and less young, gay and straight all banded together to do the work. Yet the prevailing work we did was not removing the paint. 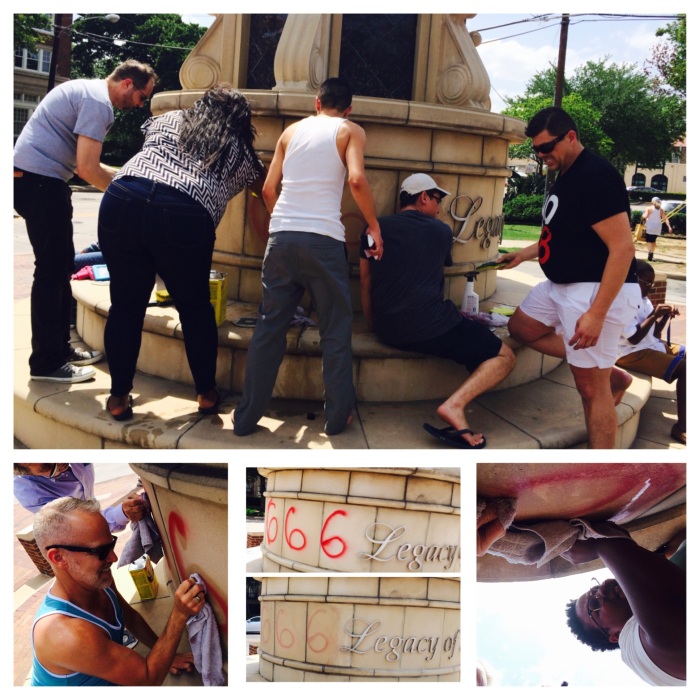 Rather, it was showing love is stronger than hate.

A little paint is nothing, I say to myself.

Yeah, we’ll sandblast off the paint. (Or, as my friend Leslie and I suggested, just leave it on the driveway and paint a giant rainbow with shiny lettering over it!)

We will probably look over our shoulders a little more frequently.

And we will love.
Strongly.
So strongly that it will choke out the evil around us.

That is my hope, at least. And in that hope, we all of us boldly take another step toward love, even if it’s in the face of hate.

One thought on “Today, hate did not win. (Again.)”