I didn’t know her.
In fact, after we met, I didn’t even get her name.
We met once, on August 20, 2014, at a rally to express our grief and anger over the murder Mike Brown, the unarmed teen who was shot by police in Ferguson, MO.

I don’t know why I went that night except that I was ardently compelled to go. Seeing yet another young man of color shot down–and the fear that his killer would walk–had me angry and distraught for days. Afraid that I would not be welcomed but undeterred, I walked into the crowd carrying an “Michael Brown is ALL of us” sign. I caught more than my share of shade and side-eyes. Maybe five percent of the crowed were white and more than once I felt people looking into my eyes saying, “what the hell are you doing here white man?!”

In addition to being one of the few white faces in attendance, some of us stood behind a “Queers Against Racist Cops” banner someone had brought. White and gay–I certainly stood out. 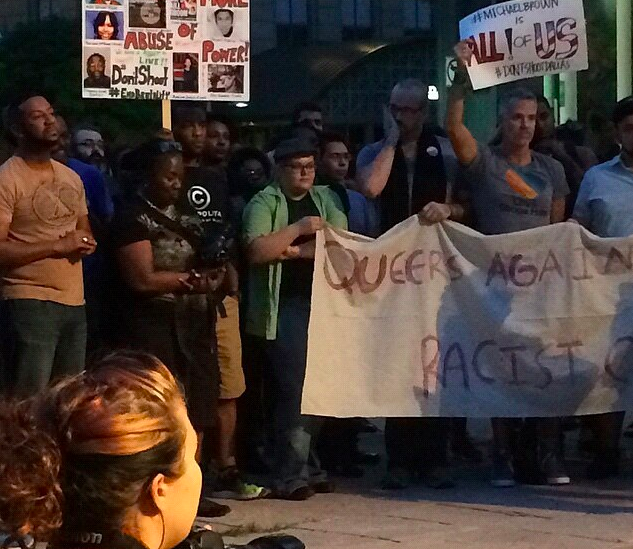 I listened to several people speak–all of them by African-American, many of them angry and defiant, all of them heartbroken–and I could not let the moment pass without saying something. I knew I had to speak. Arguing with the spirit that was urging me to speak a word of solidarity, I said to myself, “I don’t belong here. They don’t want me here.” But I went forward anyway. I took my turn and expressed my sorrow over yet another senseless death and, fighting back tears, called on white people to become part of the solution and instead of ignoring the situation. 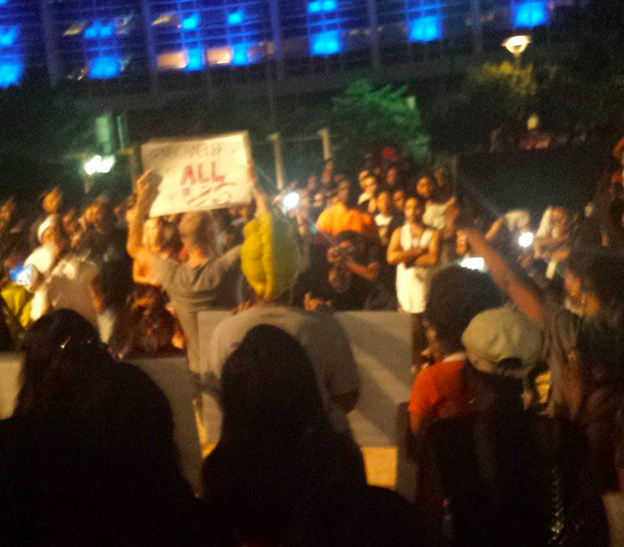 My vague memory informs me that the crowd listened quietly, as if they were stunned or unsure how to react. I walked away unsure of whether they approved but convinced I had done what I needed to do; I was obviously shaken from the emotion of the moment.

After the last speeches, we began to organize into a march to Victory Park when a young mother–carrying one child and holding the hand of another came up to me. She briefly let go of the hand of her child and wrapped her arms around me and hugged me.

She pulled away, tears in her eyes, and said,

“Thank you. Thank you for being here.”

She took the hand of her son and walked away.

And ever since–in every stand I take against racism, every word I write about inequity and intolerance among the races–this young woman is in my mind. She changed me and informed the work that I plan to engage myself until I am no longer able to do so.

You see, the stark reality is that this young woman’s sons face the very real fear of the very same fate as Mike Brown, Tamir Rice, Trayvon Martin, and so many others. And as I stood there, overwhelmed by the experience, I knew that I myself would never know her fear and anguish. That my white sons never experienced nor would their children, unless they were mixed-race, experience this kind of fear. And that I had to do something about it. 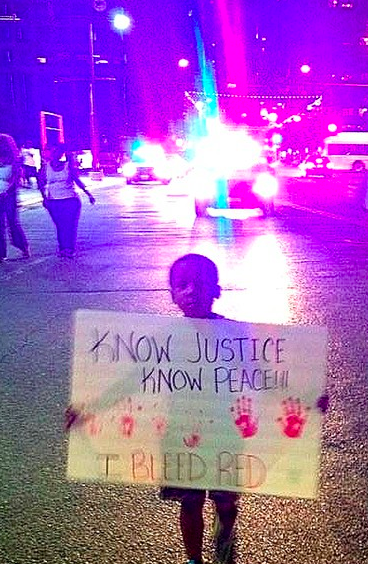 This woman changed my life and I promise her–and her sons–that I will do my damnedest to help change our country so no other child of color need fear a fate like Mike Brown’s.

Read more about that night: It isn’t about me–It’s about US.

One thought on “60. A young mother desperate for a different reality for her sons”