Where would any movement for equality and civil rights be without allies?

I’ve said for some time that we need to be grateful for the hard work of a generation-and-then-some who fought to bring the gay-rights movement to where it is today. But I believe the tipping point came when enough non-gay, cisgender people stood up and fought alongside us–in increasing numbers–so much so that now a super-majority of Americans stand with us on the issue of marriage equality.

And that brings me to #47–a woman who is representative of many of the beautiful allies in my life–Lynetta Elder. 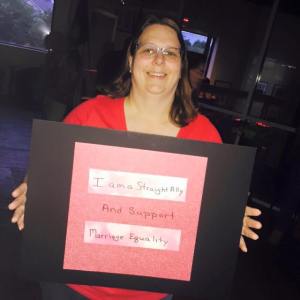 I knew of Lynetta at church but did not get to know her well until we became sojourners, of sorts (Ruth! Ruth! Ruth!) at the Journey–a three-day spiritual renewal retreat we both attended. Since that time, my respect and love for her has only increased as I watch her faithfully, time-and-again, exude love and encouragement to everyone around her.

She diligently honors her mother by caring for her during the decline brought on by Alzheimer’s and is a loving, deeply supportive, wise mother to her daughter. And she’s a nurse–what more do you need to say?!

Much like a mother-hen caring for her chicks, she defends her gay, lesbian, and transgender friends and their equality, dignity, and place in the church, leaving absolutely no doubt what she believes “love your neighbor as yourself” means.

Recently someone said something very hurtful to her on the Facebook. Despite the painful experience, I was touched by how many–in very Lynetta-fashion–came running to her aid, defending her, reminding her of her value, telling her how much she is loved.

In a lot of ways, I think people responded that way because they’ve seen her do it for others. In fact, my interest in and passion for taking a stand for others outside my own identity has been–in many ways–modeled after her own.

Thank you my friend and fellow traveller for your authentic journey toward love and acceptance that informs–and inspires–my own.