All too often in life, people see a problem and choose to complain about it but never really do anything. Some people provide lofty ideals and a lot of lip-service but offer precious little to actually solve the problem.

And then there are people who see a problem as a challenge and instead of complaining or just talking about it, actually roll up their sleeves, educate themselves, and do the work.

Jalenzski Brown and PJ Moton epitomize what a person in the last group looks like and in doing so have become leaders in a community where there are very few voices addressing the challenges they do.

Though HIV is no longer largely viewed as the death sentence it used to be, the infection of HIV is still on the rise–particularly in the young, black, same-gender-loving, male community. This community, like others made up of a marginalized population, suffers with stigmatization and the lack of healthcare more acutely than white populations. Further, mainstream messaging about HIV/AIDS is not particularly focused on the young black gay male population and as a result of lack of awareness and educational resources, it is more at risk and pays a higher cost.

That’s where Jalenzski and PJ come in. The leaders of United Black Ellument (U-BE)—an organization affiliated with the Resource Center that exists to foster community and connection among young, black, gay men. Specifically:

United Black Ellument exists to enable young, black same-gender-loving men to fulfill their greatest potential for good. We are creating ways for young men to come together, meet, socialize, and learn to support one another. We provide alternative social events and opportunities for same-gender-loving men to promote our diversity, well-being, and strength as individuals and as a community. We create a safe environment to talk and encourage each other about issues that are important to us, including safer sex.

They don’t just talk about safe-sex practices; they take it further, helping the men they serve learn how to navigate a society that does not favor them, how to find success in life through vocation and relationship, and for some, how to pull themselves up out of tough times and make something of their lives. And they feed people. They clothe people. They are there for those struggling with addiction or HIV or abandonment from their families.

And yeah, they talk about safe-sex, too.

And I just thought I was busy. These two men have dedicated their lives and livelihoods to their community in such a way that they seem to have something going just about every day and night of the week. And if they’re not doing something, they’re researching how to get more resources for what they do, more attention for their causes, and more involvement from the broader community—both the gay community and the black community.

I can’t live in a place of regret—but sometimes I think about what if I had amassed the education they have and committed myself to such important work when I was a young man. How much of a difference I could have made…

But I live in the present and have an eye to the future. I know that the future will be brighter when we face challenges head-on, united together, and do our part.

I salute them and am going to do what I can to be like them and respond to challenges with the focus, determination, and heart that they do.

(Oh–and save me a seat at the next Thursday night spades game!) 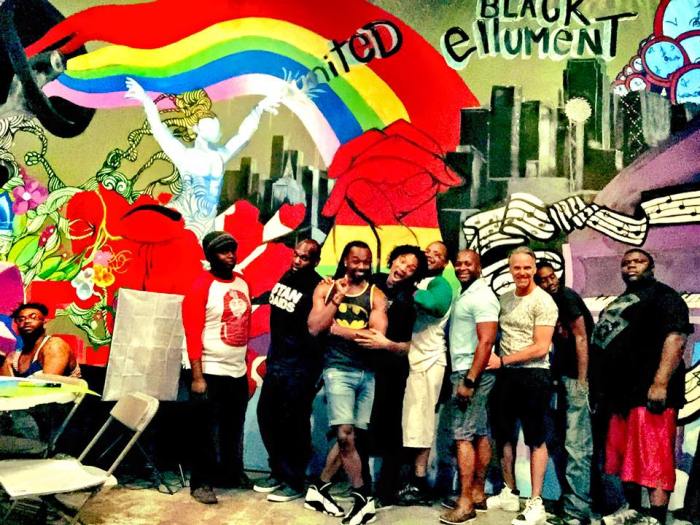 With PJ, Jalenzski and some friends earlier this year at the U-BE HQ

Previous:
33. because she lived