“The boy who had once felt invisible would forever ache simply to be seen.” (225) 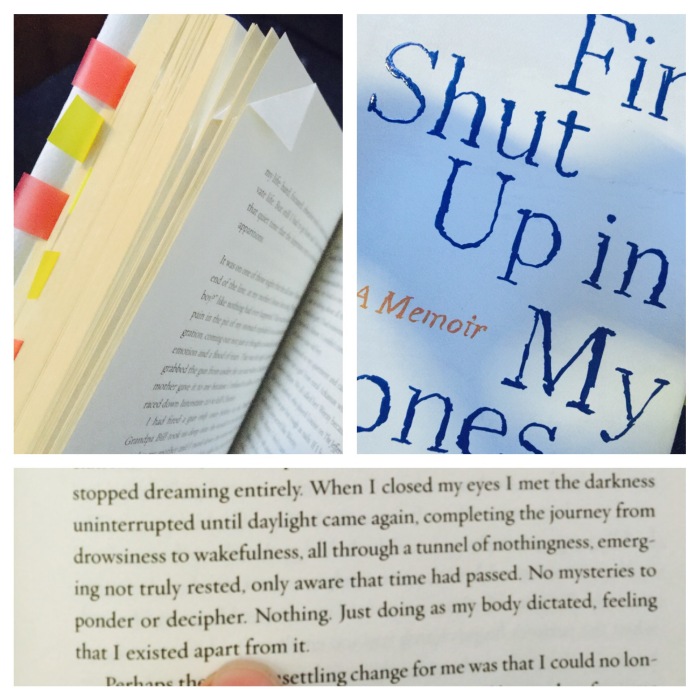 I eagerly turned to the final chapter of Charles M. Blow’s “Fire Shut Up in My Bones” as the flight taking me back to Oakland from home in Dallas left the ground. So eager was I to read the book, I had actually pre-ordered it; but life and busyness and fatigue caused it to remain unread by my bedside for weeks, finally being packed in a box and shipped ahead of my grad school arrival.

I started the book in the final days of orientation and, determined to finish it before classes started, devoured most of the book on the flight home for one last visit, reaching the last chapter, frustratingly, just as we descended.

Enraptured by every word, I dog-eared page after page, full of delight over Blow’s sumptuous turns of phrases, vivid recollections, heart-breaking alliteration, and anguished truths. What follows are just a few lines I found particularly profound:

“I had pushed down that part of me that so offended folks. My mother could now breathe freely, even if it meant that I was left gasping for air.” (191)

“Although religion, with all its talk of dying and blood and burning, scared me, I was fascinated by God’s use of fouled-up men and fallen women to extend His message; by His liberation of the poor, the outcast, and the infirm; and by His obsession with improbable transformations and inappropriate ascensions.” (77)

“In that moment in the graveyard I saw my own life and trials through the prism of past lives.” (81)

“It took a machine designed to catch liars to help me see that I didn’t yet know my own truth.” (204)

“Like a raft pushed gently from the shore, she drifted quietly from now into forever–a beautiful life, beautifully surrendered.” (6)

“I loved Greta in a different way, a deeper way, the way bodies come together more for completion than passion.” (195)

“Being a child with nothing, it didn’t take much to satisfy me. The smallest trinkets sparked the wonder of a great treasure–a copper penny, a gold button, a fake gem wriggled free from fake jewelry. They were ideas made real in faraway places by unknown hands, things that somehow made their way into mine, things that, when touched, connected me to another world, one I thought I might never see, where people might have time for me.” (29)
“They [the old folks in the neighborhood] taught me that you only live once, but for a life well lived, one turn was enough.” (22)

Moments earlier, tears had filled to the brim of my eyelids as I told my fiancé goodbye for now. Not long after we reached our cruising altitude, I read the final chapter and those tears breached their barrier. Tears for Char’esBaby, for the pain and confusion that led him to live–survive–a life that could lead him to write such a victorious tome, for the many beautiful creations of God who never get that far with their own tragic stories.

“Daring to step into oneself is the bravest, strangest, most natural, most terrifying thing a person can do, because when you cease to wrap yourself in artifice you are naked, and when you are naked you are vulnerable.” (219)

As I read along, I had never felt such resonance with a lonely, painful childhood and yet simultaneously a more divergent path than my own. I struggled to imagine how the author, just two years younger than me, and I could have grown up in the same decade–much less the same half-century. Surely he was not writing about the same 1970s and 1980s as I had experienced.

I felt guilt and shame for a life of privilege–for being born into a race that was not devalued by society like his was. Yet I shared with the author a sense of growing up different, not like the other boys, hurt by those I trusted, forged into the man I am today by those who loved me as best they could, surviving the pain I experienced and atoning for the pain I caused others, finding God in self and self in God.

“My faith was slowly eroding. Religion itself increasingly seemed a hollow homage to an eviscerated idea, a thing done out of the momentum of its always having been done. Finally I fell back on the original God of life, the God that exists apart from books and rules and fear, the God that we first come to know before we know much of anything, God as only children know God. (144)

[The following paragraph–I won’t quote it here–is as sumptuous a psalm as any King David ever wrote.]

I marvel in the transformative story Charles Blow has shared with us. Through authenticity and bravery, he opens his heart, navigates old wounds, analyzes the man he has become through the lens of the past.

And in doing so, he presents the world with a theology full of forgiveness, atonement, and pride in who he was created to be.

The world needs to hear more stories just like this. Maybe it’s my turn now.